This weekend Bill has mostly been forcing a foreign receptacle up the rear end of a chicken and dumping it onto a bed of burning embers in the name of truly great cuisine.

BrightHouse gave us a bbq grill as a wedding present and we’ve been happily making the most of it. On Sunday we decided to grill ourselves up some delicious veggies and chicken, and prepared a ton of food to throw onto the barbie. Looking at the glistening basted mound of prepared food we realised that we easily had enough to feed ourselves and several others so hastily hatched a plan to have dinner guests. Dac and Elizabeth answered the calling.

We had intended to finish off last weeks yard tidying effort and battle to create a plantable patch of wasteland by attacking the leaves and undergrowth on the other side of the drive that afternoon, but, now we had to have a change of plan. Cue the pair of us dashing around the house all afternoon trying to turn what was once a complete lived in wreck into a gleaming, sparkling, showcase home. I think we succeeded, house is now looking spankingly splendid. Hoorah.

Dac and Elizabeth turned up on the dot just as the first flickers of flame were creeping around the charcoal briquettes and soon we were all huddled around the warmth of the grill watching the flames lick and char our evening meal.

I had created a rather haphazard but damn tasty marinade for the veggies using the golden syrup I was *very* excited to find down the Dekalb Farmer’s Market (mmmm out of the strong came forth sweetness) and some of the fabulous Tavonian mustard Sy and Mel gave us for Christmas (came from Creber’s), and Bill had pulverised some chicken breasts using his new tenderiser (another wedding present) so we were soon tucking into a veritable feast.

But, the best was to come…what a spectacle…the most entertaining way to cook a moist and succulent chicken ever: 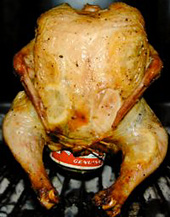 Bill’s piece de resistance was an absolute winner. He had lovingly prepared the bird by stuffing lemon and garlic right up under the skin, tenderly caressed it in an olive oil marinade and then thrust a can of beer up inside it. Not only does this boil up inside and keep the bird moist and flavourful but it enables the hapless bird to stand on the grill and look like it is performing a little variety show jig for you. Nice. (okay, this also helps to cook the bird evenly and you don’t need to keep turning it)

Bill also added some water and Jack Daniels soaked hickory chips to the coals, covered the grill with the lid and thus smoked the bird in pungent goodness.

The cooked result was most impressive. I think we did good. Our guests certainly left in awe of Bill’s oh so manly grilling skills.

After a lovely evening Dac and Elizabeth raced off fairly early because Elizabeth didn’t want to miss one of the last three (ever) episodes of Sex and the City so Bill enticed me into playing a couple of games of Yahtzee. This coupled with a rather large bottle of voddy proved rather entertaining and rolling the dice terribly gripping. Bill won and declared it bedtime.

I dived and hid beneath the office table and tried desperately hard to stiffle giggles as I listened to Bill race around the house in search of me. Almost totally blew it with a guffaw when I watched him karate kick through the spare room door! In the end though it was Quince who gave me away when he came straight towards my hideway, gave me a quizzical look and stuck his cold bottom licking probe of a muzzle in my face. Silly dog led hubby straight to me, bah humbug.

2 Responses to Beer Butt Chicken and other tales